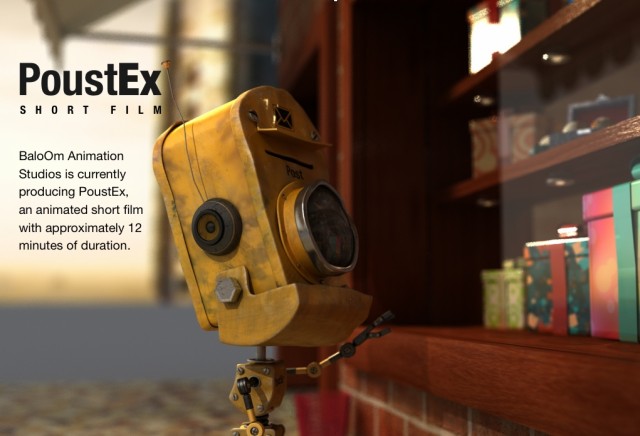 PoustEx is a project of a short film on computer animation created by BaloOm Animation Studios. The story presents PoustEx, a young mailman robot on his first day of work admiring everything he sees, like a kid in an amusement park. But when, in a house, does not have mailbox, PoustEx solves personally deliver a letter and perceives that his deliveries did not do well to their recipients. Now he needs to fix it, and this will lead him to face major challenges.

The purpose of film is instigate the reflection about what our choices and actions are offering to the world.

Directed by Cristiano Policarpo and produced by Ingrid Gomes, the short film is being developed in a partnership Brazil – Uruguay and has the collaboration of people from several countries.

The idea of PoustEx emerged in early 2011 and some steps have been completed, as story, screenplay, character creation, conceptual drawings, storyboard excerpts, animation tests, much of the modeling, etc.

But there is still much to do, because our goal is to produce a complex 3D animation, with dynamics, visually delightful and especially with a good story to tell.

The launch of PoustEx is scheduled for the end of 2013, it will go to a number of animation and film festivals. Also, it will be available on DVD, Blu-Ray and for download on the iTunes Store.

The film will have approximate duration of 12 minutes and is appropriate for all ages.

What is crowdfunding?
It is a collaborative funding model that has emerged in recent times, in which anyone can help become possible the project that loves.

To become a collaborator, appearing in the credits and receive exclusive benefits is simple, just click on the green button next “SUPPORT THIS PROJECT” and follow the steps.

Why do we seek collaborative funding?
We have worked on this film for almost two years in a process self-funded and independent. We decided to open this project for collaborative funding in order to become faster the production and allow more people to participate in this amazing idea.

“The money raised through crowdfunding will allow our full dedication to the project, ensuring the desired quality and its implementation in less time.” – Cristiano Policarpo (director and co-writer)

The crowdfunding is an innovative and great tool, in that all people who love and believe in this project, can collaborate and help us make it real.

“The collaborative funding will allow that the film is conducted as it was conceived, without the need of large producers companies.” – Ingrid Gomes (producer and co-writer)

Anyone with a credit card can participate.

If you think you may assist in some way, we’d love to have you with us.